I first discovered this a few days ago in the wonderful post by Abroad in the Yard:
http://www.abroadintheyard.com/26000-years-of-capturing-the-human-face/ 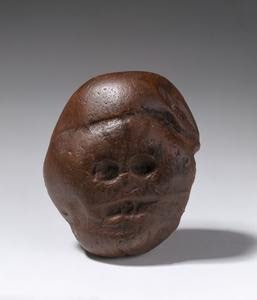 My take on how this fist-sized cobble found its way at least 4 kilometers away from its natural source to a cave which has evidence of habitation by Australopithecus africanus.  The biggest challenge in writing something like this is the aspect of the language.  While they must have communicated somehow, it certainly wasn't in English, nor in complete sentences.  As I did with the Ancient Meat Eaters post, I'll write below my take of the concepts of this individual.

South Africa, +/- Two and Half Million Years Ago

She walked through the brush slowly.   In her left arm she carried her new young, suckling him occasionally.   Her mate was behind her, poking around the grasses for roots.  The sun was getting bright and hot.  She was thirsty, and was relieved to hear the stream running ahead of her.
With a soft call to her mate, she walked ahead to the stream.
She knew this place, and had come here before.  The shore was rocky and hurt her feet unless she walked very slowly.  On one end the grasses grew thick and high.  She carefully picked her way here, sniffing the air as she did so.  It smelled safe. She listened carefully; there were no dangerous sounds.
Once at the grasses she grabbed a handful with her free hand and bent them.  Then she did this again.  As they got lower she started stepping on them and mashing them further down. She stepped in this and made sure it was to her liking.  Bending down she took her sleeping infant and put him in the nest.  For a moment she stayed on all four limbs, looking down at him.
Standing up and turning around, she sniffed the air again.  Cautiously, she walked to the water.  A little way above her, the stream fell over a few rocks. Here though, it flowed gently, making a small pool before continuing down to the tall place.  Stooping on all fours again, she looked at the water.  The water was strange, showing another who she didn't know.  This one always did what she did.  They smelled and tasted like water...not dangerous.  She dipped her hand into the water and brought it to her mouth eagerly, drinking and sucking her fingers.  She did this again, turning back to check on her infant as she drank.  Her mate joined her, going straight to the stream, ignoring the infant.
The last time she drank she startled, a short bark escaping her dripping mouth.  In the water was another one. This one seemed to grin at her, then scowl as the water flowed over it.  For some time she watched this one.  Her mate had alerted to her call, standing and sniffing the air about him. When he saw her staring at the water, he relaxed.  He sidled over to her and tried to see what had her attention so focused.  Cautiously, she poked a finger in the water.  The other one disappeared for a moment, then came back.  She poked again this time touching it.  It was hard, a rock.  Perhaps this one was stone.  She put her entire hand in the water and touched it.  Round, smooth except for the face, it fit in her hand comfortably.  She closed her fingers around the stone one and brought it out of the water.
This time a real scream escaped her.  This one was like blood.  In fear she stumbled to her two feet and fell backwards.  She scrambled to her infant who had woken at her scream and was now crying.
Her mate looked at this one, and touched it.  He picked it up, then with a grunt, tossed it back to the ground.  He stood up and went back to the grasses, eternally searching for food.
For some time she sat with her infant suckling him.  She sniffed the air for danger, but sensed nothing.  Yet something was different.
After a while her infant slept again.  Putting him gently into the nest, she crawled over to the stone one.  It wasn't as deep as blood now. She touched it then picked it up, looking at it.  Hard and still, it looked back at her.  It was somehow familiar, like one who had been gone a long time.
She sniffed the stone one, then tasted it.  The stone one didn't move.  She held it for a long time, then put it near her sleeping infant.
Taking a final drink from the stream, she stood up on her two feet and sniffed the air again.  She listened intently for animal sounds.  It was quiet.  She gathered her sleeping infant in her left arm and stood up to leave.
After a moment, she bent down and picked up the Stone One.  She had to find her mate, and take the Stone One to the other ones.  Many times on the way back to the safe place she looked at the Stone One.  And it always looked back at her.

What follows is my take on her thoughts, which I feel would be more like concepts.

Hi, I'm glad you stopped by. Is there a prehistoric event or scenario you'd like to see added to this blog? Let me know!
auraburrows@gmail.com
@auraburrows